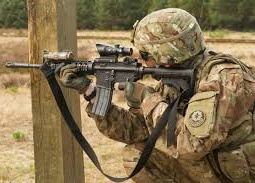 A. On the firing line keep weapons grounded until a command has been given allowing you to handle your weapons. Take all commands from the tower.

B. Never handle your weapon with someone down range or in the front of the firing line.

Any comments/questions? Be sure to check out our Composite Risk Management subject area.